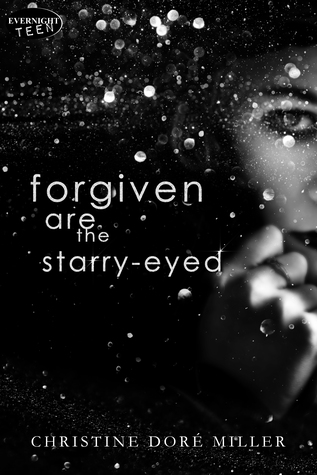 Naïve sixteen-year-old Andrea Cavanaugh is elated when Josh, a charismatic, bright-eyed piano prodigy, becomes her first boyfriend. But the closer she gets to him, the more she realizes that he is not the boy she first fell for. In its poignancy and emotional darkness, Forgiven Are the Starry-Eyed takes you deep into the delicate and devastating web of shame that spirals from the depths of dating violence when dreamy teenage love turns dark. Andrea must find not only an escape, but a belief that she is even worthy of freedom.

My eyelids closed as if they were being drawn down by sluggish, unhurried weights. When I forced them open after several seemingly endless moments, nothing had changed. I could still make out a blurry image of Josh standing nearby, Mr. Thompson’s hands clenched firmly on Josh’s shoulders from behind. There was a crowd, I think, and muffled voices. The steel school locker felt cold against my back and I recognized the familiar feeling that lately seemed to just dwell and ache in my bones. Fear, I think it was, mixed with just enough madness to keep the blood racing through my veins … fast. Too fast.

“Why did you do that, Andrea?” Josh shouted in my direction.

My eyes fell closed again. I don’t remember what else he said. I just remember the feeling of each overly pronounced syllable piercing the air while he said it. I stared through the darkness that danced behind my heavy eyelids. What had I done?

I tried to pry open my hazy eyes to examine the faces of the expanding crowd as they stood, mouths agape. I only recognized a few. There were hardcover music books sprawled open on the tile floor at my feet. Confused, I looked to Josh, but the heavy silence of the room deafened any words he may have been saying. I gripped the ends of my soft, thin hair between my slender fingers and waited. Each thought sunk deeper than the last.

There was a poster taped sloppily against the locker behind me. I turned my head to face it and focused. The ends were curled up and there were ripples in the masking tape adorned to the edges. “Oakwood High School Invitational—TONIGHT” it read in handwritten purple block letters. There was a pixelated saxophone image pasted underneath the words, “Brought to you by Mr. Thompson and the Oakwood High Jazz Band.” I brought my hand up to trace the edges. The poster board felt crisp and thick under my fingertips. I could smell the aftermath of the permanent marker. The loud reverberating voice behind me got softer until it resembled a deep echo I could easily ignore. I started to pick at the tape from the bottom left corner of the poster until I felt the sticky residue ball up underneath my fingernail.

Suddenly the life reentered my body in one abrupt breath when I felt a strong tug on my arm. I turned and saw Ethan Marks. Everyone else was gone. Had it been minutes this time? Hours?

“Andrea! Come on,” he barked at me, interlacing my arm, tucking it quickly under his. He jerked me to a standing position and pulled me down the hall, speeding up his gate as I stumbled to catch up.

“Where’s Josh?” I asked worriedly, but he didn’t answer. We were silent as we walked through the empty hallway. I lifted my gaze, trying to catch Ethan’s eye, trying to read his thoughts. His light blue eyes, usually sparkling with laughter, were steely and somber as he charged forward, dragging me with him, away from the wreckage I’d caused.

He stopped short and took a deep breath. His eyes were unyielding and dismal as they studied me, and slowly his frustration melted into a deep sadness.

“What happened, Andrea? What was that back there?”

“I don’t know…” My voice began breaking. My thoughts were muddled beyond recognition and I couldn’t form the right words, or any words, to explain.

Ethan wrapped himself around me in a gentle, firm embrace. It felt kind. And warm. And wonderfully different. My muscles unclenched for the first time in months, and I didn’t know I was crying until I tasted the salt as it stained my face. I buried my head into Ethan’s chest as he tightened his hold on me. I wanted him to say something, to tell me everything would be all right, but we both knew better. So we just stood there, Ethan supporting me as I clasped the back of his cotton t-shirt between my fingers.

After a few minutes, I fully returned to my body as my breathing calmed. I steadied my stance and took a step backward, shakily holding Ethan’s forearms as I regained my balance. Wiping smudged mascara from my pale face, I met Ethan’s eyes and quickly looked down, fixating on a crack in the tile below me.

“I’m okay. Ethan, I’m sorry. I’m sorry you had to … I’m sorry I … ugh your shirt.” I motioned to the tear stains on his light green tee that crept from his chest to his shoulder.

“It’s fine.” I wiped my face and took a deep breath. “Thanks,” I said, squeezing Ethan’s hand and looking in his eyes sincerely, so he knew I meant it. “I should go. But thanks.” I shook my head and turned around to walk back into the havoc and face what I had done. I felt Ethan staring at me as I left. He was just another person whose life would’ve been better if he hadn’t met me. I swallowed, took a breath, and kept walking. Christine lives in the Los Angeles area with her husband and their two children. She works full-time as a senior marketing manager for a large media company and holds a Bachelor’s of Business Administration degree from Western Michigan University where she studied marketing. Growing up in the chilly midwest, she developed a deep passion for dramatic writing and alternative music at an early age, which still peaks through in her adult-corporate-mom life today. Forgiven Are the Starry-Eyed is Christine’s debut novel.

My Interview with the Author