Today I’m really excited to be taking part in the Book Tour of, Katherine Tudor Duché
by Tony Riches, which is being hosted by HFBT

Attractive, wealthy and influential, Katherine Willoughby is one of the most unusual ladies of the Tudor court. A favourite of King Henry VIII, Katherine knows all his six wives, his daughters Mary and Elizabeth, and his son Edward, as well as being related by marriage to Lady Jane Grey.

She marries Tudor knight, Sir Charles Brandon, and becomes Duchess of Suffolk at the age of fourteen. Her Spanish mother, Maria de Salinas, is Queen Catherine of Aragon blady in waiting, so it is a challenging time for them all when King Henry marries the enigmatic Anne Boleyn.

Following Annes dramatic downfall, the short reign of young Catherine Howard, and the tragic death of Jane Seymour, Katherines young sons are tutored with the future king, Prince Edward, and become his friends.

Katherine and Charles Brandon are chosen to welcome Anna of Cleves as she arrives in England. When the royal marriage is annulled, Katherines good friend, Catherine Parr becomes the kings sixth wife, and they work to promote religious reform.

When King Edward dies, his Catholic sister Mary is crowned queen and Katherines Protestant faith puts her family in great danger – from which there seems no escape.

Katherines remarkable true story continues the epic tale of the rise of the Tudors, which began with the best-selling Tudor trilogy and concludes with the reign of Queen Elizabeth I.

Katherine’s remarkable true story continues the epic tale of the rise of the Tudors, which began with the best-selling Tudor trilogy and concludes with the reign of Queen Elizabeth I.

Katherine Willoughby is a ward of the crown having most of her life at one of her father’s estate at Parham. Katherine became a great heiresses after the passing of her father, her inheritance was under contact disputed.

Two years have passed since the the death of her father, and Sir Charles Brandon, 1st Duke of Suffolk, purchases her wardship from the crown. Katherine is betrothed to the the only surviving son of the Duke Charles Brandon. Henry Brandon first Earl of Lincoln. Henry was the child of Brandon and his third wife Mary Tudor, Who happens to be King Henry Vlll sister.

Katherine enjoys living within the Brandon’s household for several years. She becomes quite close family but, when a series of events happen, the Duke’s wife Mary dies, after suffering with a long drawn out illness. Next, her betrothed, the very young Henry Brandon, dies unexpectedly. The Duke, in fear of losing Katherine very extensive lands, and inheritances, decides to marry Katherine himself.

Katherine Tudor Duchess, set against the very turbulent times of King Henry Vlll Reign. Katherine is a first hand witness to the rise and fall of long list of Henry Vlll wives, and England’s separation from Rome and Catholicism.

Tony Riches, delivers a vividly descriptive, interesting, and well-written read here with characters and a setting that totally captivated and intrigued me. I was totally taken and fascinated with historically political drama that unfolds within the Tudor Court.

Katherine Willoughby was a impressive formidable woman. She was able to withstand some horrific times of religious turmoil in England, and protect her family and survive under dark days following the death of King Henry VIIl death.

Katherine of Suffolk story comes to life, within these pages, along with the authors intensive, well researched accounts. The intriguing life of the Dutches of of this incredible story of incredible tragedy, love and loss.

Katherine Tudor Duchess, by Tony Riches, Is the captivating, an engaging, harrowing beautiful historical fiction novel. The novel totally captures something extraordinary here as well as fully capturing my heart. I was immediately taken with this story and found myself totally mesmerized and in awe of Tony Riche’s ability to weave such a fantastic story that is based on real-life people and actual historical events with his own interwoven liberties of impressive fictional storytelling.

Tony Riches is a full-time writer and lives with his wife in Pembrokeshire, West Wales. After several successful non-fiction books, Tony turned to novel writing and wrote Queen Sacrifice, set in 10th century Wales, followed by The Shell, a thriller set in present day Kenya. A specialist in the history of the early Tudors, he is best known for his Tudor Trilogy. Tonys other international best sellers include Warwick ~ The Man Behind the Wars of the Roses and The Secret Diary of Eleanor Cobham

Tuesday, November 19
Guest Post at On the Tudor Trail

Thursday, November 21
Review at 100 Pages a Day
Feature at View from the Birdhouse

Monday, November 25
Review at A Chick Who Reads

Wednesday, November 27
Review at Passages to the Past

Thursday, December 5
Review at Donna’s Book Blog
Review at Curling up by the Fire

Friday, December 6
Excerpt at Coffee and Ink
Review at A Darn Good Read

During the Blog Tour, we are giving away two paperbacks of Katherine-Tudor Duchess by Tony Riches! To enter, please use the Gleam form below.

Giveaway ends at 11:59 pm EST on December 6th. You must be 18 or older to enter.
Paperback giveaway is open internationally.
Only one entry per household.
All giveaway entrants agree to be honest and not cheat the systems; any suspicion of fraud will be decided upon by blog/site owner and the sponsor, and entrants may be disqualified at our discretion.
The winner has 48 hours to claim prize or a new winner is chosen. 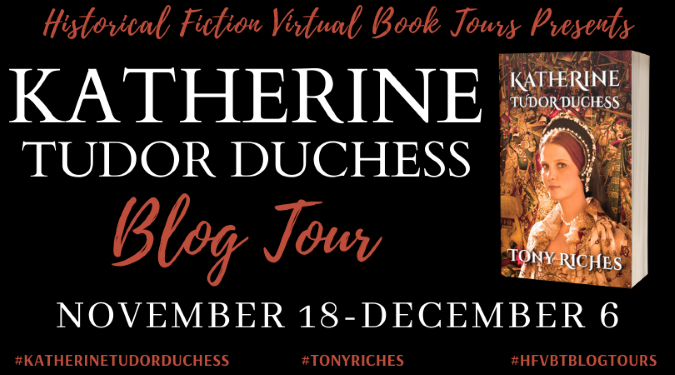