Blog Tour The Spirt Of Fire

Today I’m really excited to be taking part in the Book Tour of, The Spirt Of Fire.

The Spirit of Fire by Susanne Dunlap

Listen to the Wind has been rated 10 out of 10 and was a quarterfinalist in the BookLife Prize, and won a Gold badge from the International Review of Books.

The eagerly anticipated sequel to Listen to the Wind, complex, absorbing, and dramatic start to a planned series. Kirkus Reviews

Azemar now a knight and Baron of Montpezat has rescued his childhood friend, Azalais, from the Castel de Belascon, where she was forced to disguise as a noblewoman and become the wife of the baron. But the captivating trobairitz Jordane de la Moux dAniort and her damozel Johana have escaped with them, putting them all in grave peril. Will Jordane conflicting goal of reuniting with the rebel Raimon de Berenger thwart Azemar and Azalaisâ quest to solve the mystery of their origins, which they believe lies within the heretic fortress of Montsegur? When a cryptic note leads them to the Templar stronghold at Mas Deu, Azemar undergoes brutal trials, and discovers that his ultimate purpose could lead him to betray the very people he wants to protect. And their altered route leads Azalais into the path of her old enemy, the Dominican monk, Fraire Martin. Full of surprising twists and turns, dangerous adventures, and true love, The Spirit of Fire continues the Orphans of Tolosa Trilogy.

Praise for Listen to the Wind

Listen to the Wind has been rated 10 out of 10 in the BookLife Prize and won a Gold badge from the International Review of Books.

Dunlap breathes life into the distant 13th-century setting… Poetry and music are as essential to the plot as warfare, with engaging glimpses of trobairitz (female troubadours). . . . A complex, absorbing, and dramatic start to a planned series.- Kirkus Reviews

Listen to the Wind is in its own league. Completely imaginative, mature and playful all at once, this book doesn’t book compete with any other novel for its spot on the bookshelf, as it will outshine many and sit comfortably among the classics.” – The BookLife Prize

Susanne Dunlap… is both a superb storyteller and a rich historian of the period. Its customs and language, castles, troubadours, mountains, thick forests, villages, monasteries, and vineyards come vividly to life as Azemar and Azala find themselves drawn into a path that will shape history.- Stephanie Cowell, author of Claude and Camille: a novel of Monet

In its mix of page-turning thriller with well researched historical novel, it draws comparison to the finely crafted work of Kate Mosse and Ariana Franklin.- Nancy Bilyeau, author of The Blue and the Joanna Stafford trilogy

Susanne Dunlap sweeping saga captivates readers imaginations from the first page, plunging them back into the Languedoc region of France in the 13th Century. Her impeccable research allows her three spirited protagonists to live, love, fight and breathe life into the dangerous period of rebellion and inquisition, when the Cathars struggled to hold on to their culture and old faith against the power of the Pope. A compelling read for lovers of adventure and romance. -Anne Easter Smith, author of
A Rose for the Crown, Daughter of York, Royal Mistress

The fortitude and ingenuity of her characters helps them adapt to all manner of circumstances, and the result is an engaging tale of escape, secrets, and mental toughness. For those looking for a smartly written captivating read, I highly recommend this first book in the Orphans of Tolosa trilogy.- Amy Hawes, Book Club Babble

This is an intriguing and complex story with lots of secrets and lies interwoven within the characters personal stories, it is charming, exciting and mesmerising.- Chicks, Rogues, and Scandals

I love how vibrant the world is made, how danger really struck fear into my heart, how the pain felt real, everything is beautifully written and I thoroughly enjoyed this.- Clarissa Reads It All

The Spirit of Fire, by Susanne Dunlap, is the highly anticipated next book in the Orphans of Tolosa Trilogy.

Susanne Dunlap, expertise in blending historical elements with captivating fiction is impeccable, Dunlap writing flows seamlessly transporting you to the harrowing time of thirteenth century period in a region that will not become part of France until much later in the sixteenth century, which is called Occitanie. This riveting novel covering the years 1243-1244, pulling the reader into the horrific dark period in French History. The violence that the Cathars suffered as heretics, by the crusades carried out by the inquisition of Catholic Church is depicted within the pages of this compelling historical fiction.

The journey continues with The Spirt Of Fire, Azemar discovers after following the death of his patron Baron de Montpezat, that he has been named his heir.Azemar and Azalaïs leave behind Jordane and Johana, to their own fates. They travel swiftly and undetected, following cryptic message to retrieve a book and armed stone that was stolen from Azemar from the house that some of his belongs were stored.

Upon reaching the temple of monks at M’as Deu. Azemar all is not what it seems and Azemar struggles and survies brutal training for a treacherous purpose that would lead him to destroy those of what he longs to find and preserve.The lives of Jordane and Johana, continuous intertwines with that of Azemar and Azalaïs, creating unforgettable moving and in the end a heart wrenching novel.

Susanne Dunlap delivers an atmospheric, adventurous, engaging, and well-written read here with compelling and illustrious characters, it is a stunning storyline that unfolds perfectly. Richly detailed, the book is gripping and captures the struggles of the Cathars, an heretical Christian sect that flourished in Western Europe, who called themselves the true Christians. The Catholic Frenchs agenda was to eradicate them completely the is set the year before the final stand of the heretics against the French at Montsegur.

An enjoyable historical fiction that is brisk and unique, immensely entertaining, with well fleshed out characters. The authors ability to deftly create an immersive, and gripping tale, that takes the reader on an epic adventure. Dunlap is a gifted author, her narration is superb and brilliant. The plot line is complex and it grabbed me and I was completely immersed. Beautifully written, rich in historic detail, perfect for anyone who enjoys reading historical fiction.

Susanne Dunlap is the author of six works of historical fiction. Two are for adults (Emilie’s Voice and Liszt’s Kiss, both published by Touchstone books of Simon & Schuster). Four are for young adults (The Musician’s Daughter, Anastasia’s Secret, In the Shadow of the Lamp, and The Academie, published by Bloomsbury). A graduate of Smith College with a PhD in Music History from Yale University, Susanne grew up in Buffalo, New York and has lived in London, Brooklyn and Northampton, MA. She now lives in Northampton with her long-time partner, Charles, has two grown daughters, three granddaughters, a grandson, a stepson and a stepdaughter, four step-grandsons and one step-granddaughterâ€”that’s a total of four children and nine grandchildren!

In her spare time she cycles in the beautiful Pioneer Valley.

Tuesday, December 10
Feature at What Is That Book About

Thursday, December 12
Review at Books and Zebras
Review at Chicks, Rogues and Scandals

Wednesday, December 18
Review at Passages to the Past

During the Blog Tour, we are giving away a set of Listen to the Wind & The Spirit of Fire by Susanne Dunlap! To enter, please use the Gleam form below.

Giveaway ends at 11:59 pm EST on December 20th. You must be 18 or older to enter.
Paperback giveaway is open internationally.
Only one entry per household.
All giveaway entrants agree to be honest and not cheat the systems; any suspicion of fraud will be decided upon by blog/site owner and the sponsor, and entrants may be disqualified at our discretion.
The winner has 48 hours to claim prize or a new winner is chosen.

Listen to the Wind
https://widget.gleamjs.io/e.js 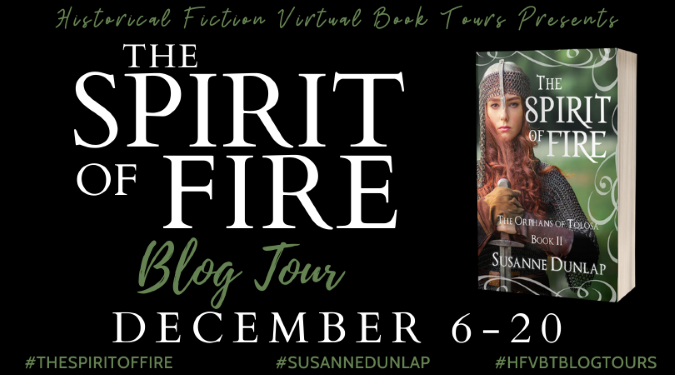 2 Comments on “Blog Tour The Spirt Of Fire”