Book Tour Written In Their Stars

Today I’m really excited to be taking part in the Book Tour of, Written In The Stars, by Elizabeth St John, which is being hosted by HFBT!

Written in their Stars
by Elizabeth St. John

London, 1649. Horrified eyewitnesses to King Charles bloody execution, Royalists Nan Wilmot and Frances Apsley plot to return the kings exiled son to Englands throne, while their radical cousin Luce, the wife of king-killer John Hutchinson, rejoices in the new republics triumph. Nan exploits her high-ranking position as Countess of Rochester to manipulate Englands great divide, flouting Cromwell and establishing a Royalist spy network; while Frances and her husband Allen join the destitute prince in Paris Louvre Palace to support his restoration. As the women work from the shadows to topple Cromwells regime, their husbands fight openly for the throne on Englands bloody battlefields.

But will the return of the king be a victory, or destroy them all? Separated by loyalty and bound by love, Luce, Nan and Frances hold the fate of England and their family in their hands.

A true story based on surviving memoirs of Elizabeth St.John’s family, Written in their Stars is the third novel in the Lydiard Chronicles series.

Available on Amazon | Other eRetailers

A spymistress, a rebel and a courtier.

A mesmerizing epic brilliant historical fiction, set during the turbulent world of 17th century England. As the English Civil War rages on, and loyalties divide families over Commonwealth or Crown.

Written in their Stars, is the third and final instalment in Elizabeth St. John, Lydiard Trilogy. A riveting true story of three cousins, Luce Hutchinson, Frances Apsley, and Nan Wilmont.

This rich literary masterpiece opens with execution and the aftermath that follows the death of Charles I.

Navigating through the political strife that threatens to tear their family apart. The three Women, Lucy Hutchinson, wife of Regicide Colonel John Hutchinson; Frances Apsley, wife of Lucy’s brother Sir Allen Apsley; and Nan Wilmot, Countess of Rochester, Lucy and Allen’s cousin, were best friends and fierce opponents. Lucy supported the execution of the king and the establishment of the commonwealth, while Frances and Nan were fervent Royalists and worked to bring King Charles II home from exile in Paris.

Working in the backdrop, spying in the shadows to bring down the Cromwell’s regime. Nan Wilmot, and Frances Apsley, work together in plotting the return the king’s exiled son to England’s throne. Which ultimately is aimed at the restoration of the English Monarchy.

Written in their Stars by Elizabeth St. John, is a richly textured, mesmerizing, novel. The strength of this novel handsdown is the author’s fabulous characterizations. Elizabeth St. John, definitely shines when it comes to how interesting and fleshed out her well developed characters are.

An immensely captivating story that is full of history and the most compelling and illustrious characters. The harrowing storyline is a fascinating one and it is written is such a way that will bring the history to life, I can see why this talented author is loved by so many, her way at weaving fact and fiction with her wonderful words is a masterpiece of writing.

The third book in The Lydiard Chronicles series, Written in their Stars, is a true story based on surviving memoirs, letters and court documents from Elizabeth St.John’s family history.

Elizabeth St.John spends her time between California, England, and the past. An award-winning author, historian and genealogist, she has tracked down family papers and residences from Nottingham Castle, Lydiard Park, to the Tower of London. Although the family sold a few castles and country homes along the way (it’s hard to keep a good castle going these days), Elizabeth’s family still occupy them – in the form of portraits, memoirs, and gardens that carry their imprint. And the occasional ghost. But that’s a different story…

Monday, December 9
Review at Passages to the Past

Saturday, December 21
Review at Tales from the Book Dragon

Monday, January 6
Review at Reading the Past

Wednesday, January 8
Review at Donna’s Book Blog
Review at I’m All About Books

During the Blog Tour, we are giving away two signed copies of Written in their Stars! To enter, please use the Gleam form below.

Giveaway ends at 11:59 pm EST on January 10th. You must be 18 or older to enter.
Paperback giveaway is open to US residents only.
Only one entry per household.
All giveaway entrants agree to be honest and not cheat the systems; any suspicion of fraud will be decided upon by blog/site owner and the sponsor, and entrants may be disqualified at our discretion.
The winner has 48 hours to claim prize or a new winner is chosen.

Written in Their Stars
https://widget.gleamjs.io/e.js 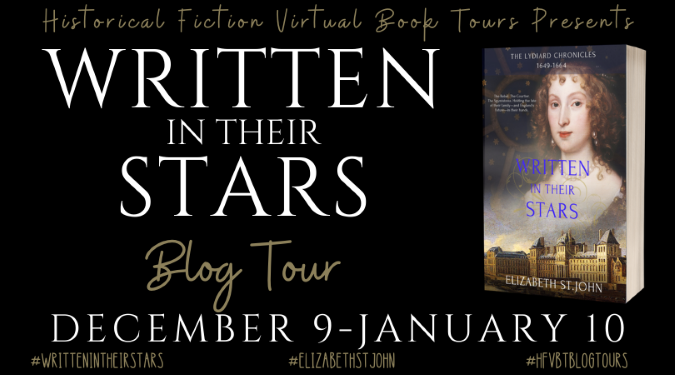 2 Comments on “Book Tour Written In Their Stars”