Today I’m really excited to be taking part in the Book Tour of, A King Under Siege
by Mercedes Rochelle, which is being hosted by HFBT!

A King Under Siege
by Mercedes Rochelle

Richard II found himself under siege not once, but twice in his minority. Crowned king at age ten, he was only fourteen when the Peasants’ Revolt terrorized London. But he proved himself every bit the Plantagenet successor, facing Wat Tyler and the rebels when all seemed lost. Alas, his triumph was short-lived, and for the next ten years he struggled to assert himself against his uncles and increasingly hostile nobles. Just like in the days of his great-grandfather Edward II, vengeful magnates strove to separate him from his friends and advisors, and even threatened to depose him if he refused to do their bidding. The Lords Appellant, as they came to be known, purged the royal household with the help of the Merciless Parliament. They murdered his closest allies, leaving the King alone and defenseless. He would never forget his humiliation at the hands of his subjects. Richard’s inability to protect his adherents would haunt him for the rest of his life, and he vowed that next time, retribution would be his.

“This story is rich in historical detail. It has so obviously been meticulously researched. I cannot but commend Rochelle for this exceptional work of scholarship. A King Under Siege: Book One of The Plantagenet Legacy is one of those books that once started is impossible to put down. This book is filled with non-stop action. There are enough plots and conspiracies to satisfy any lover of historical fiction. This is storytelling at its very best.” Mary Anne Yarde from Myths, Legends, Books & Coffee Pots Blog

A King Under Siege: Book One of The Plantagenet Legacy by Mercedes Rochelle is a stunning extensive researched account of the Peasant Revolt of 1381 and the following years under the Richard II early kingship.

Crowned King, Richard II was only ten years old when he succeeded to the throne, Struggling under the enormous burden of the weight placed on his shoulders.

England’s common people were suffering under the burden of the The Hundred Years’ War. Which was a series of conflicts from 1337 to 1453, waged between the House of Plantagenets, who ruled England, and the House of Valois, who were the rulers of France. It was the most grueling conflits of the Middle Ages. With each side drawing their own allies into the war, fighting for the throne of the largest kingdom spanning five generations.

Giving the reader an in-depth look at the drama and corruption surrounding the court life of the young King. Also the reader is given an unbiased accounts of the Peasants Revolt, also called Wat Tyler’s Rebellion, depicting both sides of the arguments. Bringing to Life hardship of the peasants as they struggled with being overly taxed in the feudal system

With Edward Ill death and Richard on the thrown, the powerful barons were tired of paying for Hundred Years War. In 1377, John of Gaunt imposed a new tax, the Poll (head) Tax. This was supposed to be a one time tax, it became so successful that it was repeated three more times. Unlike the normal taxes of that day this tax was a head tax.

This is an exceptionally written novel, is an intricately plotted emotional account of Richard ll as he continuous attempts to prove himself in years following the first revolt. This profound, faced paced, bold narration gives light to the circumstances that the king faces within the circle surrounding the treacherous, vicious noblemen.

With precision writing that flows seamlessly, along with a rich narrative voice, Mercedes Rochelle, A King Under Siege: Book One of The Plantagenet Legacy is a powerful thought provoking historical fiction that will stay with you long after you close the book.

Born and raised in St. Louis MO, Mercedes Rochelle graduated with a degree in English literature from the University of Missouri. Mercedes learned about living history as a re-enactor and has been enamored with historical fiction ever since. A move to New York to do research and two careers ensued, but writing fiction remains her primary vocation. She lives in Sergeantsville, NJ with her husband in a log home they had built themselves.

Saturday, February 29
Excerpt at Passages to the Past

Monday, March 2
Review at A Chick Who Reads

Thursday, March 12
Feature at I’m All About Books

Friday, March 13
Review at bookramblings
Review at Impressions In Ink

Wednesday, March 18
Interview at Passages to the Past

During the Blog Tour, we are giving away 5 paperback copies of A King Under Siege! To enter, please use the Gleam form below.

Giveaway ends at 11:59 pm EST on March 18th. You must be 18 or older to enter.
Paperback giveaway is open to the US only.
Only one entry per household.
All giveaway entrants agree to be honest and not cheat the systems; any suspicion of fraud will be decided upon by blog/site owner and the sponsor, and entrants may be disqualified at our discretion.
The winner has 48 hours to claim prize or a new winner is chosen.

A King Under Siege
https://widget.gleamjs.io/e.js 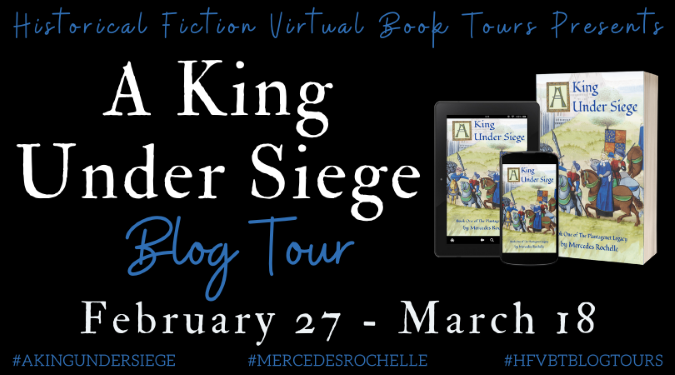