“Susann Cokal’s latest miracle, Mermaid Moon, springs from the tides where Hans Christian Andersen’s Little Mermaid once swam — and walked to land. But she delivers something even more rich and strange, and a mermaid heroine who will swim away with your heart.” —Gregory Maguire, author of Wicked and Egg & Spoon

“Cokal creates a well-developed matriarchal mermaid mythology in which women couple, bonded by love and respect, and men are largely unnecessary. Through several voices and richly detailed prose, these markedly different worlds overlap and diverge to impart a nuanced exploration of power, family, faith, and love.” —Publishers Weekly

“A beautifully told, immersive story that layers fairy-tale elements with more modern themes, allowing for a different experience with every reread.” —Shelf Awareness

In the far northern reaches of civilization, a mermaid leaves the sea to look for her land-dwelling mother among people as desperate for magic and miracles as they are for life and love.

Blood calls to blood; charm calls to charm.
It is the way of the world.
Come close and tell us your dreams.
—The Mermaids

Sanna has been living as a mermaid — but she is only half seavish. The night of her birth, a sea-witch cast a spell that made Sanna’s people, including her landish mother, forget how and where she was born.

Now Sanna is sixteen and an outsider in the seavish flok where women rule and mothers mean everything. She is determined to go to land and learn who she is. So she apprentices herself to the ancient witch, Sjældent, to learn the magic of making and unmaking. With a new pair of legs and a mysterious quest to complete for her teacher, she follows a clue that leads her ashore on the Thirty-Seven Dark Islands.

Her fellow mermaids wait floating on the seaskin as Sanna stumbles into a wall of white roses thirsty for blood, a hardscrabble people hungry for miracles, and a baroness of fading beauty who will do anything to live forever, even at the expense of her own children.

From the author of the Michael L. Printz Honor Book The Kingdom of Little Wounds comes a gorgeously told tale of belonging, sacrifice, fear, hope, and mortality.

You can purchase Mermaid Moon at the following Retailers:

The roses are pouring forth a deeper scent, one that plunges to the bottom of the belly. It is the best scent, and the red is the most beautiful color, any of these poor people have known in their lives. And the cause of it all–that stranger, the pale-haired, blue-robed girl–now lies in the rose vine’s embrace, with thorns in her skin, her own blood glittering richer than Baroness Thyrla’s jewels. Richer even than the red of the roses. The people break out both laughing and weeping. When at last they can speak, they cry, “Miracle!’

MERMAID MOON by Susann Cokal delivers a lovely immersive retelling, matriarchal mermaid mythology. Where women are bonded couples, While men are largely unnecessary. The tale follows Sanna, a half-landish mermaid who leaves her flok to seek her human mother. Being advised by the ancient, riddle-tongued sea witch Sjældent. Sanna seeks out a castle ruled by ageless and unkind Baroness Thyrla.

Thyrla, is dark and deadly witch who has amassed great power by doing unspeakable crimes of stealing powers and youth….even from

This engaging book is with its richly detailed prose, is complex and provocative. This ya fantasy, fiction tale unfolds with darkish undertones, is a stunning atmospheric read. As the plot takes some notable twists, Sanna, finds herself betrothed and no where closer to finding the treasure that Sjældent requires as payment. 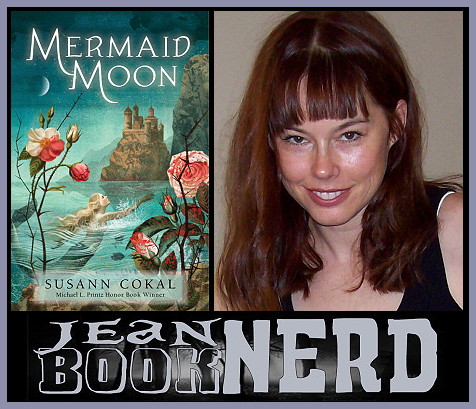 Susann Cokal is a moody historical novelist, a pop-culture essayist, book critic, magazine editor, and sometime professor of creative writing and modern literature. She lives in a creepy old farmhouse in Richmond, Virginia, with seven cats, a dog, a spouse, and some peacocks that supposedly belong to a neighbor. She is the author of two books for young adults and two for regular adults.

Susann’s previous book, The Kingdom of Little Wounds, received several national awards, including a silver medal from the American Library Association’s Michael L. Printz Award series. It also got starred reviews in Kirkus, School Library Journal, The Bulletin of the Center for Children’s Books, and Publishers Weekly, and praise from Booklist, The New York Times Boook Review, and other venues. It was #3 on the Boston Globe list of best YAs of the 2013 and won an ALAN citation from the National Council of Teachers of English.

Giveaway is open to International. | Must be 13+ to Enter

– 5 Winners will receive a Copy of MERMAID MOON by Susann Cokal.