Today I’m really excited to be taking part in the Book Tour of The Road To Delano by John DeSimone, which is being hosted by HFVBT!

The Road to Delano
by John DeSimone

Jack Duncan is a high school senior whose dream is to play baseball in college and beyond―as far away from Delano as possible. He longs to escape the political turmoil surrounding the labor struggles of the striking fieldworkers that infests his small ag town. Ever since his father, a grape grower, died under suspicious circumstances ten years earlier, he’s had to be the sole emotional support of his mother, who has kept secrets from him about his father’s involvement in the ongoing labor strife.

With their property on the verge of a tax sale, Jack drives an old combine into town to sell it so he and his mother don’t become homeless. On the road, an old friend of his father’s shows up and hands him the police report indicating Jack’s father was murdered. Jack is compelled to dig deep to discover the entire truth, which throws him into the heart of the corruption endemic in the Central Valley. Everything he has dreamed of is at stake if he can’t control his impulse for revenge.

While Jack’s girlfriend, the intelligent and articulate Ella, warns him not to so anything to jeopardize their plans of moving to L.A., after graduation, Jack turns to his best friend, Adrian, a star player on the team, to help to save his mother’s land. When Jack’s efforts to rescue a stolen piece of farm equipment leaves Adrian―the son of a boycotting fieldworker who works closely with Cesar Chavez―in a catastrophic situation, Jack must bail his friend out of his dilemma before it ruins his future prospects. Jack uses his wits, his acumen at card playing, and his boldness to raise the money to spring his friend, who has been transformed by his jail experience.

The Road to Delano is the path Jack, Ella, and Adrian must take to find their strength, their duty, their destiny.

I’m John DeSimone, a novelist, memoirist, and author of The Road to Delano, a historical novel set in California’s Central Valley during the Delano grape strike led by Cesar Chavez. The story is both a coming of age story, and a historical novel rolled into one.

The inspiration for writing The Road to Delano came to me after reading about Cesar Chavez’s fast for nonviolence during the grape strike in 1968. As I studied and let the idea mature, I decided his moral stand, which I consider heroic, would have had to influence the moral choices of the young people around him. During my research, I decided that high school students must have been affected by Chavez’s stand in different ways. Jack, the son of a grower, and Adrian, the son of a farmworker, are confronted with choices.

I’m not talking about if they are going to use drugs or have sex with their girlfriends. Those are not trivial issues, for sure. But the choices they are faced with will shape their destiny and their characters in different ways far beyond their high school days. The Road to Delano is the path Jack and Adrian must take to find their strength, their duty, and their destiny.

My ambition in writing this novel is to bring to life a critical time in our state’s. history, indeed, in our country’s history. The ’60s were full of protests and movements, and the grape strike led by Cesar Chavez had its effect on our national scene. Not as dramatically as the lunch counter sit-ins in the South, but as necessary to an impoverished group of laborers, the farmworkers. Historical novels can frame an incident and help us understand the importance of the past to our lives today. I hope in writing this book, the heroic nature of Cesar Chavez’s self-sacrifice is remembered, and the story of my protagonists show truths that will last beyond a single reading of the book.

John DeSimone is a published writer, novelist, and teacher. He’s been an adjunct professor and holds an MFA in Creative Writing from Spalding University. His recent co-authored books include Broken Circle: A Memoir of Escaping Afghanistan (Little A Publishers), and Courage to Say No by Dr. Raana Mahmood, about her struggles against sexual exploitation as a female physician in Karachi. His published novel Leonardo’s Chair published in 2005.

In 2012, he won a prestigious Norman Mailer Fellowship to complete his most recent historical novel, Road to Delano. His novels Leonardo’s Chair and No Ordinary Man have received critical recognition.

He works with select clients to write stories of inspiration and determination and with those who have a vital message to bring to the marketplace of ideas in well-written books.

Tuesday, March 3
Review at Passages to the Past
Feature at Books In Their Natural Habitat

Wednesday, March 4
Feature at I’m All About Books

Thursday, March 5
Review at Tales from the Book Dragon

Saturday, March 14
Review at Reading is My Remedy

Monday, March 16
Review at Chronicles of The Boozy Reader

Friday, March 20
Review at Jessica Belmont
Review at Oh, The Books She Will Read

Wednesday, March 25
Feature at What Is That Book About

During the Blog Tour, we are giving away a copy of The Road to Delano! To enter, please use the Gleam form below.

Giveaway ends at 11:59 pm EST on March 25th. You must be 18 or older to enter.
Giveaway is open to the US only.
Only one entry per household.
All giveaway entrants agree to be honest and not cheat the systems; any suspicion of fraud will be decided upon by blog/site owner and the sponsor, and entrants may be disqualified at our discretion.
The winner has 48 hours to claim prize or a new winner is chosen.

The Road to Delano
https://widget.gleamjs.io/e.js 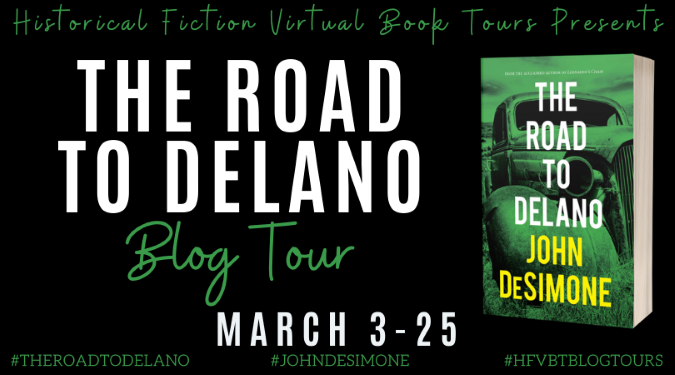