Gone With The Rogue + Book Review

Today I have a delightful romance book from the author

Gone With the Rogue

A powerful handsome rogue finally meets his match in Gone With the Rogue, the second book in the First Comes Love series from bestseller Amelia Grey.

She had an acceptable marriage of convenience. Now widowed, can this determined and beautiful mother find true and forever love?

The sinking of the Salty Dove took her husband’s life―but it didn’t drown Julia Fairbright’s courage to endure. She creates a proper life for herself and her young son. But now, the ton’s most notorious rogue is back in London, and how he makes Julia feel is anything but proper. She can’t deny the desires he awakens in her, even though she knows that the handsome devil will surely break her heart.

Garrett Stockton owns a successful shipping company and is rumored to have a woman on every continent and half-a-dozen in England. The truth, however, is that Garrett has but one mistress: the wide open sea. That is, until he meets Julia, whose spirit of independence matches his own. What begins as a flirtatious battle of wits turns far more passionate than either of them could have imagined. Suddenly, Garrett’s only desire is to sail into the sunset with Julia as his wife and young Chatwyn his son. But she won’t take his hand―how can he convince her that his love is real and his heart is hers? 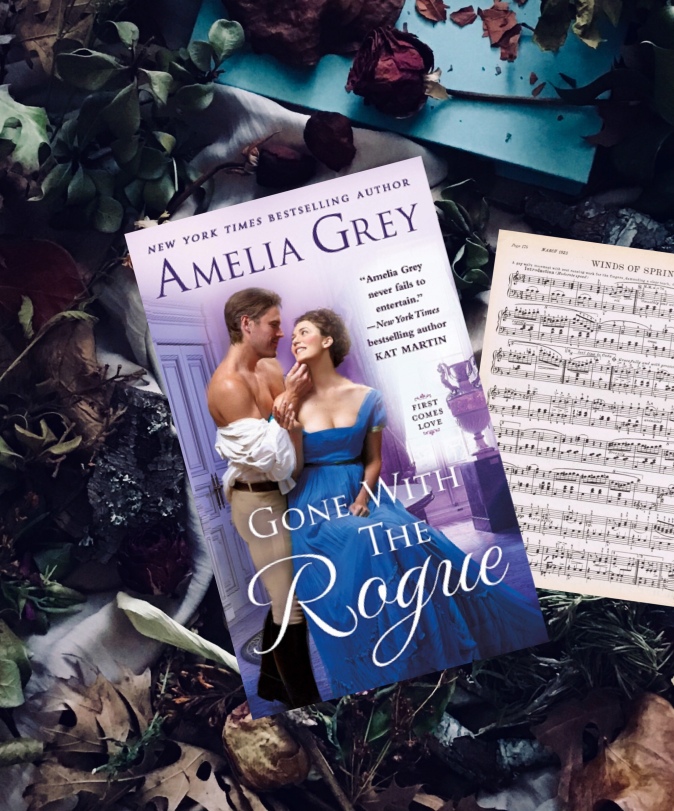 Gone With the Rogue

Gone With the Rogue is the second book in the First Comes Love series by Amelia Grey.

Lady Julia Kitson Fairbright, is a widow, mother to a four year old son, Chatwyn She also happens to be the daughter in law to Duke of Sprogsfield. Julia, suffers under the over controlling Duke, who threatens to take little Chatwyn legally away from her.

When Julia finds herself stuck high up in a tree in Hyde Park, patiently waiting for her son’s governess to return and help her down. The roguish, Garrett Stockton is taking a ride through the park altering his usual routine after being at sea. He comes the spirited young widows rescue.

Garrett Stockton owns a successful shipping company, he also has a reputation, that may or may not be true. He soon finds himself smitten with the captivating widow, and her adorable son. Lady Kitson, will have to ultimately decide if the Rogue is someone she can let her guard down and trust.

A fast paced read, one I immensely enjoyed, delightful historical romance where the hero and a heroine are perfectly matched.

I excited to read the next installment from Amelia Grey!

2 Comments on “Gone With The Rogue + Book Review”