⁣Today I’m really excited to be taking part in the Book Tour of,

The Abolitionist’s Daughter, By Diane C. McPhail which is being hosted by HFBT!

In her sweeping debut, Diane C. McPhail offers a powerful, profoundly emotional novel that explores a little-known aspect of Civil War history—Southern Abolitionists—and the timeless struggle to do right even amidst bitter conflict.

On a Mississippi morning in 1859, Emily Matthews begs her father to save a slave, Nathan, about to be auctioned away from his family. Judge Matthews is an abolitionist who runs an illegal school for his slaves, hoping to eventually set them free. One, a woman named Ginny, has become Emily’s companion and often her conscience—and understands all too well the hazards an educated slave must face. Yet even Ginny could not predict the tangled, tragic string of events set in motion as Nathan’s family arrives at the Matthews farm.

A young doctor, Charles Slate, tends to injured Nathan and begins to court Emily, finally persuading her to become his wife. But their union is disrupted by a fatal clash and a lie that will tear two families apart. As Civil War erupts, Emily, Ginny, and Emily’s stoic mother-in-law, Adeline, each face devastating losses. Emily—sheltered all her life—is especially unprepared for the hardships to come. Struggling to survive in this raw, shifting new world, Emily will discover untapped inner strength, an unlikely love, and the courage to confront deep, painful truths.

In the tradition of Cold Mountain, The Abolitionist’s Daughter eschews stereotypes of the Civil War South, instead weaving an intricate and unforgettable story of survival, loyalty, hope, and redemption.

Praise for The Abolitionist’s Daughter

“Diane McPhail excavates a nearly forgotten corner of American history and brings it to full, beating life. This is a fascinating and heartfelt look at the kinds of stories that don’t always make it into the history books.” -Louis Bayard, author of Courting Mr. Lincoln

“A contender, a deeply felt, thoroughly researched story . . . as good as it deserves to be.” -Jacquelyn Mitchard, New York Times bestselling author

“Complex, vivid, and emotionally engaging. This is a story of harsh realities written with a tenderness that shines through and honors the account of one woman’s struggle to overcome her society’s rules and her circumstances in the face of inconceivable devastation. I couldn’t put it down.” -Carol E. Anderson, author of You Can’t Buy Love Like That

“What an impressive book this is! Diane McPhail works a spell on the reader, transporting us to Mississippi in the 19th century, introducing us to a family torn apart by the time and place in which they live. She tells a dark tale, yet it’s laced with lyricism and compassion. This is a powerful, imaginative, captivating book-I’d say, even urgent, considering the time we find ourselves in now.” -Judy Goldman, author of Together

“A tender, sparkling debut that bears gentle witness to the abominations of slavery and oppression while heralding the grace, power and necessity of righting wrongs and choosing love. McPhail is full of talent and heart.” -Ethel Rohan, author of The Weight of Him”

The Deep South life in Mississippi from 1859 to 1866, Diane C. McPhail compellingly novel sheds an intimate look at an almost forgotten aspect of the civil war.

Emily Matthews and her brothers live with their father, Judge Matthews. She shares her fathers passion against slavery. This is a tragic time in our history’s past, and even though they were against the ownership of slaves, it was also against the law to grant freedom to them. Judge Matthews treats them better than most, he educates them secretly in an illegal school. The abolitionist juge’s controversial thinking has deterred any would be suitors away from his daughter Emily.

Charles Slate, a doctor who visits the Matthews residence to treat a recently purchased slave. His interest in Emily is noted, and he begins to court her. The Judge is all too agreeable to grant the young doctors Emily’s hand in marriage when it’s asked for it.

Emily is somewhat naive, but this would typical and very realistic given the time period an her status. Her growth as a character as story unfolds is remarkable, as she goes through obstacles and tribulations as the story progresses. When a series of events causing a clash between between Emily’s family and Charles Slate’s. The family she marries into ultimately becomes one that the Matthews has a land feud with.

A dramatic tale of violence, war, and the struggles of family’s torn apart. The two main protagonist are Emily, and Ginny, the slave raised with her on the plantation, who is a contant driving force of the two. Ginny’s strength holds everything together for Emily as their world explodes into multiple tragedies.

Along with Adeline, the mother of Emily’s husband. The strength of the woman adds to the story strength and continues to drive the book forward as the hardships become daunting.

Diane C. McPhail, gives a wonderful multi layered storyline, that ultimately surrounds a land dispute between two families who have married into each other. This richly descriptive book with realistic period issues and wonderful historical details comes to life under the authors lyrical prose. The exquisite writing captivated me, pulling me deep into this part of history, making me feel an immediate connection to and investment in the characters and storyline.

This intricately woven tale, explores love, loss, hardship, sacrifice and the relationships that bonds people together facing unthinkable emotional struggles, along with finding the inner strength to survive.

A riveting look at two families, and a harsh look into the flaws and morals of ourselves and each other, and finally that of forgiveness. Meticulously researched this historical fiction has left a profound lasting impression on me..

One thing that adds a deeper element for this incredible book is the idea the author based the book on documented family archives.

The Abolitionist’s Daughter, is set in Greensboro, Mississippi during the turbulent times up to and just after the American Civil War. In a time where America was dependent North and South slave labor. Judge Matthews is slave-owner but he has made a point of his beliefs in anti-slavery, making him a Mississippi Abolitionist. There were lots of families who in their estate inheritance also inherited the slaves that came with land it’s self.

Remember this was a time when you could not legally free your owned slaves. Also with the invention of the cotton gin, slave labor increased through out the South. The Haitian, Nat Turner Rebellion, increased slaveholders’ fears, and most Southern states passed laws making manumission, {freeing your slaves} nearly impossible until the passage of the 1865 The Thirteenth Amendment of the United States Constitution. 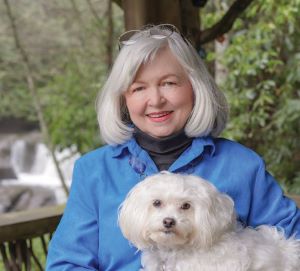 Diane C. McPhail is an artist, writer, and minister. In addition to holding an M.F.A., an M.A., and D.Min., she has studied at the University of Iowa distance learning and the Yale Writers’ Workshop, among others. Diane is a member of North Carolina Writers’ Network and the Historical Novel Society. She lives in Highlands, North Carolina, with her husband, and her dog, Pepper.

Monday, April 27
Review at Passages to the Past

Tuesday, April 28
Review at Books and Backroads
Feature at I’m All About Books

Friday, May 1
Review at Gwendalyn’s Books
Excerpt at To Read, or Not to Read

Monday, May 4
Review at Brightside Books

Tuesday, May 5
Feature at What Is That Book About

Thursday, May 7
Interview at Passages to the Past

Friday, May 8
Feature at View from the Birdhouse

Wednesday, May 13
Feature at Words and Peace

Thursday, May 14
Review at Tales from the Book Dragon

Saturday, May 16
Review at Reading is My Remedy

Friday, May 22
Review at A Darn Good Read

During the Blog Tour, we are giving away a copy of The Abolitionist’s Daughter! To enter, please use the Gleam form below.

– Giveaway ends at 11:59 pm EST on May 22nd. You must be 18 or older to enter.
– Paperback giveaway is open to the US only.
– Only one entry per household.
– All giveaway entrants agree to be honest and not cheat the systems; any suspicion of fraud will be decided upon by blog/site owner and the sponsor, and entrants may be disqualified at our discretion.
– The winner has 48 hours to claim prize or a new winner is chosen. 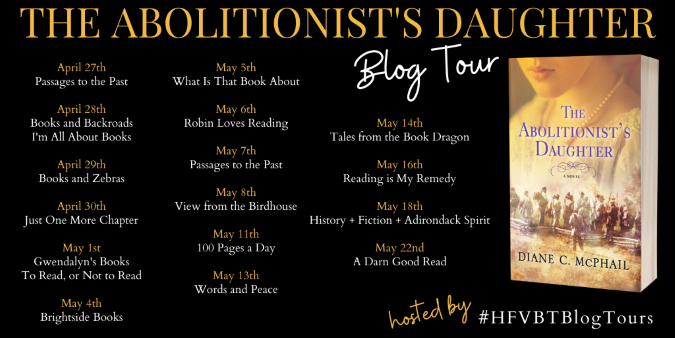 2 Comments on “The Abolitionist’s Daughter +Review+Giveaway”