Today is my stop on The Fantastic Flying Book Club Tour, The Sweeney Sisters by Lian Dolan 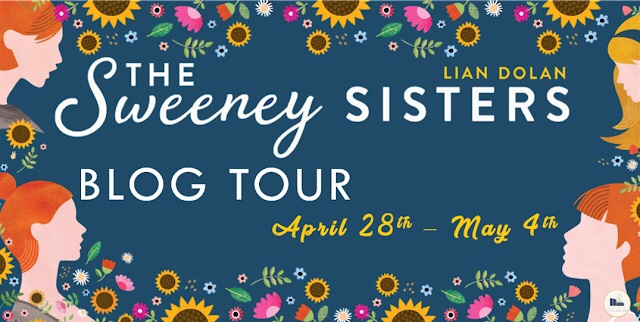 An accomplished storyteller returns with her biggest, boldest, most entertaining novel yet—a hilarious, heartfelt story about books, love, sisterhood, and the surprises we discover in our DNA that combines the wit of Jonathan Tropper with the heart of Susan Wiggs.
Maggie, Eliza, and Tricia Sweeney grew up as a happy threesome in the idyllic seaside town of Southport, Connecticut. But their mother’s death from cancer fifteen years ago tarnished their golden-hued memories, and the sisters drifted apart. Their one touchstone is their father, Bill Sweeney, an internationally famous literary lion and college professor universally adored by critics, publishers, and book lovers. When Bill dies unexpectedly one cool June night, his shell-shocked daughters return to their childhood home. They aren’t quite sure what the future holds without their larger-than-life father, but they do know how to throw an Irish wake to honor a man of his stature.
But as guests pay their respects and reminisce, one stranger, emboldened by whiskey, has crashed the party. It turns out that she too is a Sweeney sister.
When Washington, DC based journalist Serena Tucker had her DNA tested on a whim a few weeks earlier, she learned she had a 50% genetic match with a childhood neighbor—Maggie Sweeney of Southport, Connecticut. It seems Serena’s chilly WASP mother, Birdie, had a history with Bill Sweeney—one that has remained totally secret until now.
Once the shock wears off, questions abound. What does this mean for William’s literary legacy? Where is the unfinished memoir he’s stashed away, and what will it reveal? And how will a fourth Sweeney sister—a blond among redheads—fit into their story?
By turns revealing, insightful, and uproarious, The Sweeney Sisters is equal parts cautionary tale and celebration—a festive and heartfelt look at what truly makes a family. 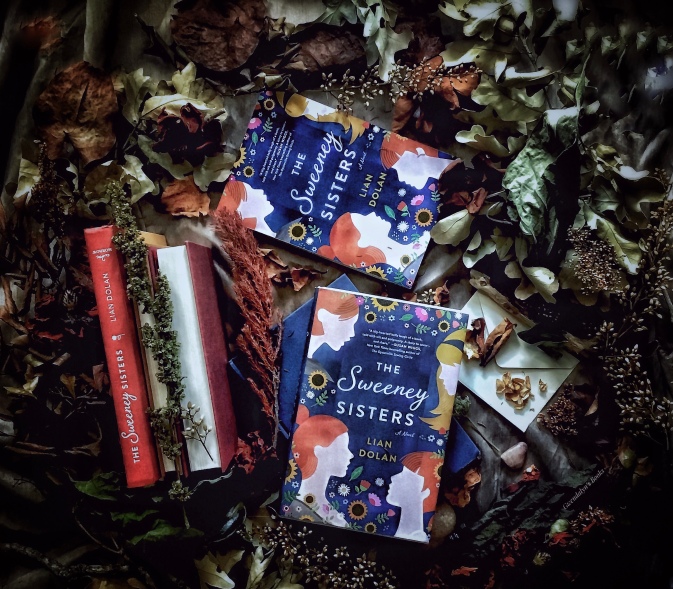 The Sweeney Sisters by Lian Dolan is intimate look at the bonds of Sisterhood.

Returning to Southport, Connecticut to plan their recently deceased literary famous father’s funeral. Maggie, Eliza, and Tricia Sweeney lost their poet mother Maeve, who passed away from cancer fifteen years earlier. Within the past fifteen years the sister have drifted apart from each other, dealing with relationships work and families.

There larger than life father is the very famous author, Bill Sweeney, a college professor, who was adored by critics, publisher, and book lovers.

After everyone has come to pay respects to their father they are approached by their father lawyer and friend, Cap. He is concerned about the whereabouts of the father’s unfinished memoir… and the a most stunning surprise of all… There is a fourth Sweeney Sister. Both of these of these concerns have legal ramifications. That even saying how this will effect everyone emotionally, as they come grips with the girls revelations about their now deceased father.

When Washington, DC based journalist Serena Tucker, whiskey intoxicated crashes Bill Sweeney’s wake. Nothing will ever be the same. It seems Serena Tucker had her DNA tested on a whim a few weeks earlier

Serena learned that she had a 50% genetic match with her childhood neighbor, Maggie Sweeney of Southport, Connecticut.

It would seem Bill Sweeney and Serena’s mother, Birdie had a love child. When the secret is revealed, the red headed Sweeney sisters come to realize they have a blonde edition to their sisterhood.

An enjoyable evenly paced book that takes a wonderful look at the bonds of sisterhood and what it means to be a family.

A light and creative breezy read, with descriptive prose, that will keep you entertained from start to finish.

Lian Dolan is a writer and talker. She’s the author of two Los Angeles Times best-selling novels, Helen of Pasadena and Elizabeth the First Wifepublished by Prospect Park Books. Her next novel, The Sweeney Sisters, will be published in 2020 by William Morrow. She’s a regular humor columnist for Pasadena Magazine and has previously written monthly columns for O, The Oprah Magazine and Working Mother Magazine. She’s also written for TV, radio and websites.
Lian is the producer and host of Satellite Sisters, the award-winning talk show she created with her four real sisters. On Satellite Sisters, she’s interviewed everyone from Nora Ephron to Madeleine Albright to Big Bird. Satellite Sisters began life as a syndicated radio show and is now a top-rated podcast for women. The recent book by the Satellite Sisters, You’re the Best: A Celebration of Friendship, is popular with book clubs.
A popular speaker who combines humor and heart, Lian has appeared on The Oprah Winfrey Show, CBS Sunday Morning and The Today Show and many local TV stations. She’s been a featured speaker at the LA Times Festival of Books, the Santa Barbara Celebrity Authors Lunch, the Literary Guild of Orange County Festival of Women Authors and dozens of other events at libraries, book stores, schools and women’s organizations across the country. In 2020, she’ll be on the faculty of the Erma Bombeck Writers Workshop.
Lian graduated from Pomona College with a degree in Classics. She lives in Pasadena, California with her husband, two sons and a big German shepherd.