Just after the Second World War, in the small English village of Chawton, an unusual but like-minded group of people band together to attempt something remarkable.

One hundred and fifty years ago, Chawton was the final home of Jane Austen, one of England’s finest novelists. Now it’s home to a few distant relatives and their diminishing estate. With the last bit of Austen’s legacy threatened, a group of disparate individuals come together to preserve both Jane Austen’s home and her legacy. These people—a laborer, a young widow, the local doctor, and a movie star, among others—could not be more different and yet they are united in their love for the works and words of Austen. As each of them endures their own quiet struggle with loss and trauma, some from the recent war, others from more distant tragedies, they rally together to create the Jane Austen Society.

The full unabridged text of THE JANE AUSTEN SOCIETY was read by the distinguished English film, television, theatre and voice actor Richard Armitage for the audiobook recording. Best known by many period drama fans for his outstanding performance as John Thornton in the BBC television adaptation of North and South (2004), Armitage also portrayed Thorin Oakenshield in Peter Jackson’s film trilogy adaptation of The Hobbit (2012 – 2014).

“Just like a story written by Austen herself, Jenner’s first novel is brimming with charming moments, endearing characters, and nuanced relationships…Readers won’t need previous knowledge of Austen and her novels to enjoy this tale’s slow revealing of secrets that build to a satisfying and dramatic ending.” ―Booklist (starred review)

“Few things draw disparate people together so quickly as discovering they love the same writers. Few writers cement such friendships as deeply as Austen does. I believe that the readers of Jenner’s book will fall in love with the readers inside Jenner’s book, all of us thinking and dreaming of Austen the whole while. What could be better? Nothing, that’s what! A wonderful book, a wonderful read.”―Karen Joy Fowler, New York Times bestselling author of The Jane Austen Book Club

“Fans of The Chilbury Ladies’ Choir and The Guernsey Literary and Potato Peel Pie Society will adore The Jane Austen Society… A charming and memorable debut, which reminds us of the universal language of literature and the power of books to unite and heal.” —Pam Jenoff, New York Times bestselling author of The Lost Girls of Paris

Spotify users can access a playlist for THE JANE AUSTEN SOCIETY at the following link: https://open.spotify.com/playlist/5Q1Vl17qyQQIvvPGeIPCkr?si=-iMhVz8uRk2v2mTdolrPdg. The playlist includes music from various film adaptions of Jane Austen’s books, as well as film scores by such incomparable artists as Hans Zimmer, Ennio Morricone, Rachel Portman, and Michael Nyman. 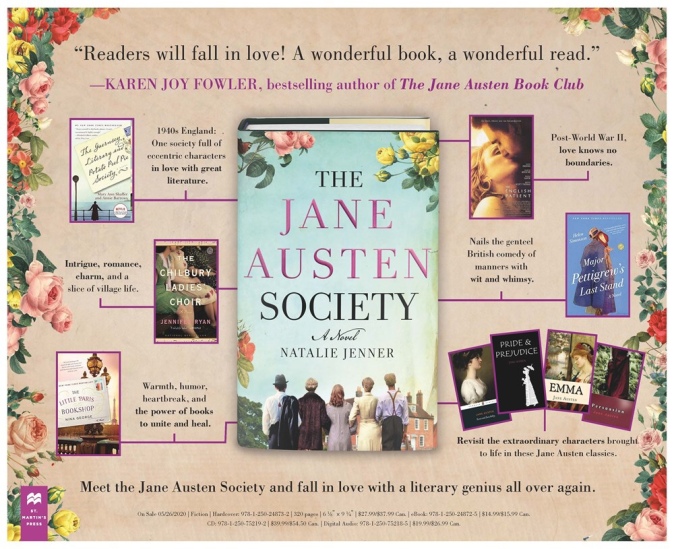 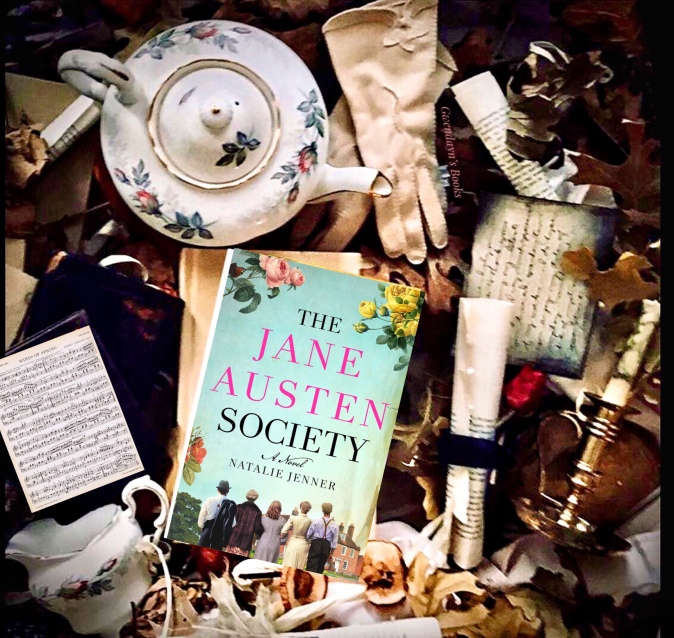 An adoring, Charming debut, The Jane Austen Society is a perfect summer read .

I love all things Jane Austen, so I was thrilled to receive The Jane Austen Society by Natalie Jenner. Thank you @stmartinspress for the early copy.

“The Jane Austen Society” set post WWII, in the small town of Chawton England, in which Jane Austen and family lived for some of the time. It’s also where she authored several books. The people of the small town are trying to puts lives back together after the turbulent chaotic events from devastating Second World War.

An Idea is formed to to save the Jane Austen’s family’s estate and turn into a tribute honouring the beloved late author. A wonderful set of characters create a literary society club that meets within the late authors home to discuss and reflect on Jane Austen writings. A engaging mismatched collective set of individuals, a doctor, war widow, handyman, a movie star and many more. All come together In this romantic and captivating storyline with whimsical characters that all come together for their love the author Jane Austen. This book truly makes for a memorable experience, as they befriend each other and some will fall in love.

The characters are well developed and fleshed as they grow throughout the novel. Written with beautiful tone and elegant prose, that emulates the style of writing that Jane Austen is so noted for. A drama that is a thought provoking tear jerker, that you be unstoppable read from start to finish.

This was a delightful read and memorable story that uses the universal language of literature and shows how it can connects us all. Perfect for Jane Austen Fans, with its Austen’s discourse that will keep you engaged, in this charming book.

Natalie Jenner is the debut author of THE JANE AUSTEN SOCIETY, a fictional telling of the start of the society in the 1940s in the village of Chawton, where Austen wrote or revised her major works. Born in England and raised in Canada, Natalie graduated from the University of Toronto with degrees in English Literature and Law and has worked for decades in the legal industry. She recently founded the independent bookstore Archetype Books in Oakville, Ontario, where she lives with her family and two rescue dogs.

May 26A Bookish Affair

May 26Margie’s Must Reads

May 26 The Reading Frenzy

May 27Book Confessions of an Ex-Ballerina

May 28Getting Your Read On

May 28The Lit Bitch

May 30Cup of Tea with that Book, Please

May 31Jane Austen in Vermont

June 01From Pemberley to Milton

June 03The Interests of a Jane Austen Girl

June 06From the TBR Pile

June 07An Historian About Town

June 10Lady with a Quill

June 12A Bookish Way of Life

June 15Stuck in a Book

June 15Confessions of a Book Addict

June 22Reading the Past

June 22Babblings of a Bookworm

June 23My Vices and Weaknesses

June 28Probably at the Library

2 Comments on “THE JANE AUSTEN SOCIETY”