Praise for UNIVERSE OF TWO

“Rarely does historical fiction get everything so right as Universe of Two: compelling characters, faithful detail, a story packed with unexpected twists, and a sure, authentic voice that never wavers. In this novel of the dawn of the atomic age and its profound consequences, Stephen Kiernan leads us along a journey of conscience as complex and infinite as the science itself.” —Beatriz Williams, New York Times bestselling author of The Golden Hour

“Stephen Kiernan has pulled off the nearly impossible, reminding us by wrapping a war story in a love story that although we hold the power for our own extinction, we also have the power to redeem, heal, and save. The most tender, terrifying, relevant book you’ll read this year.” —Jenna Blum, New York Times bestselling author of Those Who Save Us and The Lost Family

“Based loosely on the life of mathematician and organ-maker Charles B. Fisk, this fascinating novel delves into the guilt and remorse that wracked him for his part in the development of the atomic bomb. . . . The two main characters are complex and flawed, but when they come together, their world is in harmony.” —Library Journal

“Kiernan recreates the zeitgeist of America leading up to the atomic bomb on a national and personal level: the eager anticipation of wartime’s end, the grimly fascinating science, and the growing sense of guilt and dread. Simultaneously tender and hard-hitting, this riveting story offers much to reflect upon.” —Booklist

From the critically acclaimed author of The Baker’s Secret and The Curiosity comes a novel of conscience, love, and redemption—a fascinating fictionalized account of the life of Charlie Fisk, a gifted mathematician who was drafted into Manhattan Project and ordered against his morals to build the detonator for the atomic bomb. With his musician wife, he spends his postwar life seeking redemption—and they find it together.

Graduating from Harvard at the height of World War II, brilliant mathematician Charlie Fish is assigned to the Manhattan Project. Working with some of the age’s greatest scientific minds, including J. Robert Oppenheimer, Enrico Fermi, and Leo Szilard, Charlie is assigned the task of designing and building the detonator of the atomic bomb.

As he performs that work Charlie suffers a crisis of conscience, which his wife, Brenda—unaware of the true nature of Charlie’s top-secret task—mistakes as self-doubt. She urges him to set aside his qualms and continue. Once the bombs strike Hiroshima and Nagasaki, the feelings of culpability devastate him and Brenda.

At the war’s end, Charlie receives a scholarship to pursue a PhD in physics at Stanford—an opportunity he and Brenda hope will allow them a fresh start. But the past proves inescapable. All any of his new colleagues can talk about is the bomb, and what greater atomic weapons might be on the horizon. Haunted by guilt, Charlie and Brenda leave Stanford and decide to dedicate the rest of their lives to making amends for the evil he helped to birth into the world.

Based on the life of the actual mathematician Charles B. Fisk, Universe of Two combines riveting historical drama with a poignant love story. Stephen Kiernan has conjured a remarkable account of two people struggling to heal their consciences and find peace in a world forever changed.

You can purchaseUniverse of Two at the following Retailers:

“It turns out the greatest kinds of strength are hidden, and move slowly, and cannot be stopped by anything until they have changed the world.”

Nineteen  year old mathematician Charlie Fish, who is sent to Chicago under the guidance of his uncle, who happens to be a professor. His uncle assigns him advance mathematical calculations and has him expanding his knowledge in mechanical engineering.

This is in hope keeping young Charlie out of war. Charlie is a kind and very sensitive person who tends to be naive. This is something that tends to happen to a lot of really gifted individuals, or people who are genuine good hearted.

Charlie has a chance meeting with Brenda at her family’s Chicago music store during his breaks from working on a secret government project at a nearby university. The two bond and a romantic friendship blossoms. Charlie finds himself in a dilemma when he recruited as part of the team sent to Los Alamos. A top secret project that code named the Manhattan Project.

Brenda is beside herself with the the long absence of Charlie, and her frustration is seen through her inability to understand the magnitude of Charlie’s work. His cryptic letters are evasive. Brenda a talented and passionate organist, who also is little self centered, but her character is depicted perfectly.

Things become even more clearer as actuality of the work Charlie and the rest of the team have been working on. The guilt weights heavily on his shoulders, as he is sworn to deep secrecy he struggles under his moral convictions. Turning to Brenda for strength and reassurance following the actual bombings in Japan.

This was a compelling book loosely based on Charlie Fisk, the man responsible for building the detonator for the atomic bomb.

The author has interwoven several thought provoking themes in this novel, there  is the romance, along with the music and the most notable is one of listening to our own moral compass.

The author gives a glimpse of the historica, Manhattan Project and the men who designed the atom bomb. 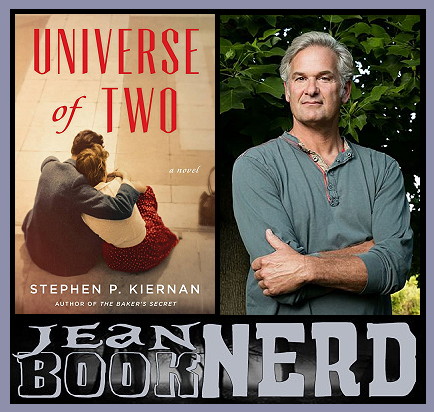 As a journalist and novelist, Stephen P. Kiernan has published nearly four million words. His newspaper work garnered more than forty awards — including the George Polk Award and the Scripps Howard Award for Distinguished Service to the First Amendment.

Stephen’s newest novel, UNIVERSE OF TWO, will be out May 5, 2020. He is also author of the novels THE CURIOSITY (now in television series development), THE BAKER’S SECRET (a regional Indie bestseller), and THE HUMMINGBIRD. He has also written two nonfiction books, LAST RIGHTS and AUTHENTIC PATRIOTISM. His work has been translated into many languages.

Stephen was born in Newtonville, NY the sixth of seven children. A graduate of Middlebury College, he received a Master of Arts degree from Johns Hopkins University and a Master of Fine Arts degree from the University of Iowa Writers’ Workshop. He has chaired the board of the Young Writers Project, served on the Vermont Legislative Committee on Pain and Palliative Care, and served on the advisory board of the New Hampshire Palliative Care Initiative. He has spoken and consulted around the country about hospice, palliative care and advance directives.

A performer on the guitar since he was ten years old, Stephen has recorded 3 CDs of solo instrumentals, and composed music for dance, the stage and documentary films.

He lives in Vermont with his two amazing sons.

AUGUST 12th WEDNESDAY A Dream Within A Dream EXCERPT

–  5 Winners will receive a Copy of UNIVERSE OF TWO by Stephen P. Kiernan.
*JBN is not responsible for Lost or Damaged Books in your Nerdy Mail Box*