A lady Guide To Mischief and Murder

A Lady’s Guide to Mischief and Murder
by Dianne Freeman

London is known for its bustle and intrigues, but the sedate English countryside can host—or hide—any number of secrets. Frances, the widowed Countess of Harleigh, needs a venue for her sister Lily’s imminent wedding, away from prying eyes. Risings, George Hazleton’s family estate in Hampshire, is a perfect choice, and soon Frances, her beloved George, and other guests have gathered to enjoy the usual country pursuits—shooting, horse riding, and romantic interludes in secluded gardens.

But the bucolic setting harbors a menace, and it’s not simply the arrival of Frances’s socially ambitious mother. Above and below stairs, mysterious accidents befall guests and staff alike. Before long, Frances suspects these “accidents” are deliberate, and fears that the intended victim is Lily’s fiancé, Leo. Frances’s mother is unimpressed by Lily’s groom-to-be and would much prefer that Lily find an aristocratic husband, just as Frances did. But now that Frances has found happiness with George—a man who loves her for much more than her dowry—she heartily approves of Lily’s choice. If she can just keep the couple safe from villains and meddling mamas.

As Frances and George search for the culprit among the assembled family, friends, and servants, more victims fall prey to the mayhem. Mishaps become full-blooded murder, and it seems that no one is safe. And unless Frances can quickly flush out the culprit, the peal of wedding bells may give way to another funeral toll…

Thank you @hfvbt and@kensingtonbooks and @diannefreemanwrites for the review copy of this book.⁣

⁣This book was received from the Author, and Publisher, in exchange for an honest review. Opinions and thoughts expressed in this review are completely my own.

Just when things seemed to a little calmer in the widowed Countess of Harleigh, Lady Wynn France’s life.
She finds that there is a need to accelerate her sister wedding, or else there will dire social consequences.
The need to acquire a large enough establishment to hold the nuptials is solved, when her secret betrothed, George offers the hastened couple, his brothers estate. That he just som happens to be house watching, while his brother is on an extended vacation.
Soon some strange mishaps thatSeem to be not so coincidental began to happen to. Just like the runway luggage cart, or right after arriving at the estate where the wedding is planed to be held, a mysterious death of one of the servants. These things do not seem to be related but there is definitely something afoot. With more so called accident and some notable  twist, Frances assumes the role of amateur sleuth, which she particularly good at. Together with her fiancé, they seek to discover the  responsible culprit, and who the next intended victim is, and why? The next intended victim is isn’t really clear, which makes solving the mystery even more challenging. The suspense builds as clues are revealed, and the tension rises with the right amount of heightened level of danger.

The luxurious English country house, along with servants makes for a very enjoyable reading experience. Lovely descriptive atmospheric details, adds to the mystery .  Which kept me turning those pages to see just where the story would lead. Great characterization, with added family drama. France and George’s relationship deeps as they conspire to set a trap for the villain. France’s is a strong and relatable character that I personally enjoy. This a highly compulsive read, a nonstop book from start to finish.

I am excited to see what other exciting new adventures happen to the clever, Mrs. Frances Wynn, The Countess of Harleigh.

I am excited to read further into the life of the clever,
Mrs. Frances Wynn, the American-born Countess of Harleigh.

Their voices grew clearer as I moved through the maze. I couldn’t pick out any words, just the sound of them. One final turn and I found George, sitting on his haunches facing the yew wall.

He jumped to his feet when he heard me approach, and for the second time today I’d made someone clutch at their chest. I must be very stealthy indeed.

Once he recovered, he let out his breath in a huff and placed a fist on his hip. With his other hand, he made an impatient, beckoning motion which one might use with a recalcitrant child. How dare he?

I made a show of looking behind me then returned my gaze to him with wide, innocent eyes. “Surely that demeaning gesture isn’t meant for me?”

He pressed his lips together and dropped his gaze to the ground where it remained for a moment. Was he counting to ten? He returned his gaze to me with what could have been a smile or just a baring of teeth. “Dearest Frances, would you do me the honor of coming this way?”

“Of course.” I stepped up beside him. “What are you examining so carefully? And why did you come in here? Do you think the arrow was shot from here?”

He boggled his eyes at the rush of questions and pointed down. “See how the ground’s disturbed? It looks like someone stood here for a time.”

I followed the direction of his finger. This section of the maze was in deep shade and due to its placement near the woods, would only have sun for the hour or two surrounding midday. As a result, the ground was damp, and while it was not muddy, I could see a light impression of my steps and George’s, but the spot in question held a deeper impression of someone who had stood, possibly shuffling his feet, facing the wall of the maze.

As I moved my gaze up the length of the shrubbery wall, I saw something even more surprising. Someone had thinned this side of the yew hedge with sheers or perhaps a knife. It wasn’t exactly a hole, but the branches had been cut and stuffed back in elsewhere along the hedge. A few littered the ground.

George waved a hand toward the thin spot. “Take a look,” he said.

I had to go up on my toes to peer through the opening, but once I did, I had a side view of the targets through the remaining foliage. “Whoever stood here, had a clear shot at Charles.”

“With a pistol perhaps, but the shrubbery is still too dense for a smooth release with a bow and arrow. It could be done, but even this thinned shrubbery would interfere as the arrow passed through, changing its direction somewhat.”

I stepped back from the hedge, both confused and horrified. “Are you saying whoever did this was not necessarily aiming for Charles’s backside?”

“Shooting through this?” He grazed his hand along the trimmed yews. “It would require a few practice shots to determine just how the arrow would fly. If the culprit was shooting from here, it would be difficult to know exactly what he was aiming for.”

“You, Leo, and Charles were all standing in front of those targets. Who would want to injure any of you?”

“That’s what I’d hoped to find out when I ran in here, but I wasn’t able to catch anyone in the act.”

“With this view, whoever it was must have seen you coming.”

“Understood, but how did he get out? I know I spent too much time with Charles before coming after the scoundrel, but there is only one entrance and exit to this maze, and we’d have seen someone come out.”

“I don’t agree. I never noticed Clara Kendrick or Ernest Treadwell enter the maze, but I found both of them wandering around in here while looking for you.”

George tipped his head toward me as if unsure he’d heard correctly. “Treadwell and Miss Kendrick were in here? What were they doing?”

“They weren’t together, if that’s what you mean. I didn’t ask either of them why they were here, but I suspect Treadwell became tired of watching the other matches and decided to wander through the maze.” I shrugged. “Clara likely noticed him and took the opportunity to follow. She’s a bit of a flirt.”

George leaned back against the yew barrier and crossed his arms over his chest. “Blast, that makes three people I didn’t see coming in here.”

“Percy Bradmore was searching for the exit when I ran in. Claimed he was wandering about and heard all the hubbub. Asked what had happened.”

“Bradmore? Heavens, half our party were in here at the time. Did he see anyone else?”

“No, though he offered to help me look, I sent him on his way. I should have just hacked my way through these hedges.”

We were quiet for a moment, both wondering just what had happened. Someone had released an arrow at the trio of gentlemen. Whoever it was had been standing right here. The cuts in the branches that hollowed out the space were fresh. But there was no bow and no culprit. Three people had been in the maze at the time and claimed they saw nothing. Any, or all of them, could be lying.

Dianne Freeman is a life-long book lover who left the world of corporate finance to pursue her passion for writing. After co-authoring the non-fiction book, Haunted Highway, The Spirits of Route 66, she realized her true love was fiction, historical mystery in particular. She also realized she didn’t like winter very much so now she and her husband pursue the endless summer by splitting their time between Michigan and Arizona. She’s been nominated for an Agatha and the prestigious Mary Higgins Clark Award, and won the 2019 Lefty Award for Best Debut Mystery.

Monday, August 3
Review & Excerpt at Probably at the Library

Monday, August 10
Review at History from a Woman’s Perspective

Friday, August 21
Review at A Darn Good Read
Review at Passages to the Past

During the Blog Tour, we are giving away a copy of A Lady’s Guide to Mischief and Murder + a $10 Amazon Gift Card! To enter, please use the Gleam form below.

The giveaway is open to US residents only and ends on August 21st. You must be 18 or older to enter.

Lady’s Guide to Mischief and Murder 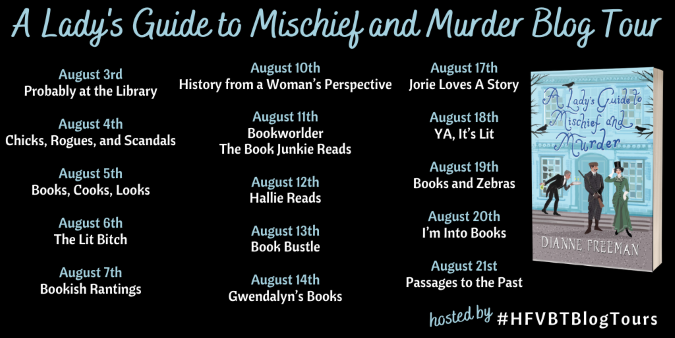