Today I’m really excited to be taking part in the Book Tour of, The London Restoration by, Rachel McMillan, which is being hosted by HFBT!

The London Restoration
by Rachel McMillan

Determined to save their marriage and the city they love, two people divided by World War II’s secrets rebuild their lives, their love, and their world.

London, Fall 1945. Architectural historian Diana Somerville’s experience as a codebreaker at Bletchley Park and her knowledge of London’s churches intersect in MI6’s pursuit of a Russian agent named Eternity. Diana wants nothing more than to begin again with her husband Brent after their separation during the war, but her signing of the Official Secrets Act keeps him at a distance.

Brent Somerville, professor of theology at King’s College, hopes aiding his wife with her church consultations will help him better understand why she disappeared when he needed her most. But he must find a way to reconcile his traumatic experiences as a stretcher bearer on the European front with her obvious lies about her wartime activities and whereabouts.

Featuring a timeless love story bolstered by flashbacks and the excavation of a priceless Roman artifact, The London Restoration is a richly atmospheric look at post-war London as two people changed by war rebuild amidst the city’s reconstruction.

The London Restoration by Rachel McMillan, is a historical fiction with the perfect amount of romance. Diana Foyle and Brent Somerville madly in love hastily married. Now that the WWII has come to end, the couple would love more than ever to settle down in marital bliss. The long anticipated reunion seems to take a back seat to Diana’s continuous secretive work. Unbeknownst to Brent,  his lovely wife took a top-secret intelligence post at Bletchley Park during the war.

Now she has been asked to use her expertise as a architectural historian and her critical knowledge of London’s churches. Even though the WWII is over there is another ominous threat on the horizon, that of the spreading of Communism.

The secret service think there is a Russian cell infiltrating into the country. Diana and the MI6 need to catch a Soviet agent named Eternity and find a file containing names of traitors. Wanting nothing more to than a sound marriage based on love and trust. She is unable to disclose her espionage work to her beloved husband because of the Official Secrets Act.

Diana’s passionate interest and her extensive research into the architect, Christopher Wren who was responsible for the design and restoration of the London churches following the Great Fire, makes her a crucial to the cause.

It seems that the individual that goes by the code name; Eternity, has been cleverly using Wren churches as drop-off points.

Brent struggles with Diana secretive ways, along with some of his demons caused by his job during the war. Will they find a way to bring back the trust and closeness within their marriage.

Gorgeous prose, this was a stunning historical romance. I really enjoyed the authors meticulously researched historical facts and the beautiful imagery within her seamless narration.

Historical Note:
Christopher Wren. Among many accomplishments, he was one of the most highly acclaimed English architects in history. After the Great Fire in 1666, he was rendered responsibility for rebuilding 52 churches in the city of London. Most of them were destroyed during WWII. 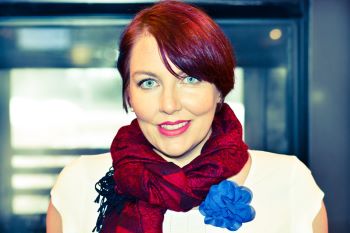 Rachel McMillan is the author of The Herringford and Watts mysteries, The Van Buren and DeLuca mysteries and The Three Quarter Time series of contemporary Viennese romances. Her next work of historical fiction, The London Restoration, releases in Summer 2020 and takes readers deep into the heart of London’s most beautiful churches. Dream, Plan, Go (May, 2020) is her first work of non-fiction. Rachel lives in Toronto, Canada and is always planning her next adventure.

Monday, August 24
Review at Chicks, Rogues and Scandals
Interview at The Green Mockingbird

Wednesday, August 26
Review at 100 Pages a Day
Interview on Jorie Loves A Story

Saturday, August 29
Review at Books and Backroads
Review at Reading is My Remedy

Monday, August 31
Review at Passages to the Past

During the Blog Tour, we are giving away 5 copies of The London Restoration! To enter, please use the Gleam form below.

The giveaway is open to US residents only and ends on August 31st. You must be 18 or older to enter. 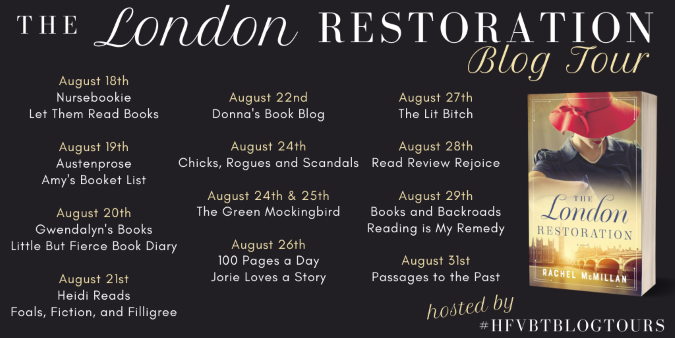 ← The Devil’s Crossing
She Wears the Mask →