Hello Bookish friends, I am slowly tackling my TBR List.

How the Multiverse Got Its Revenge

Rory Thorne must use the fairy blessings gifted to her to change the multiverse in the second book in this space opera duology.

After avoiding an arranged marriage, thwarting a coup, and inadvertently kick-starting a revolution, Rory Thorne is no longer a princess, but a space pirate.

Her new life is interrupted when Rory and her crew–former royal bodyguards, Thorsdottir and Zhang, and co-conspirator Jaed–encounter an abandoned ship registered under a false name, seemingly fallen victim to attack. As they investigate, they find evidence of vicious technology and arithmancy, alien and far beyond known capabilities.

The only answer to all the destruction is the mysterious, and unexpected, cargo: a rose plant. One that reveals themself to be sentient–and designed as a massive biological weapon. Rose seeks to escape their intended fate, and Rory and her friends must act fast when the attackers return with their superior weaponry.

As the situation gains the attention of an increasing number of alien races, Rory finds herself acting as negotiator and diplomat, in order to save Rose and her friends–and avert an unprecedented war 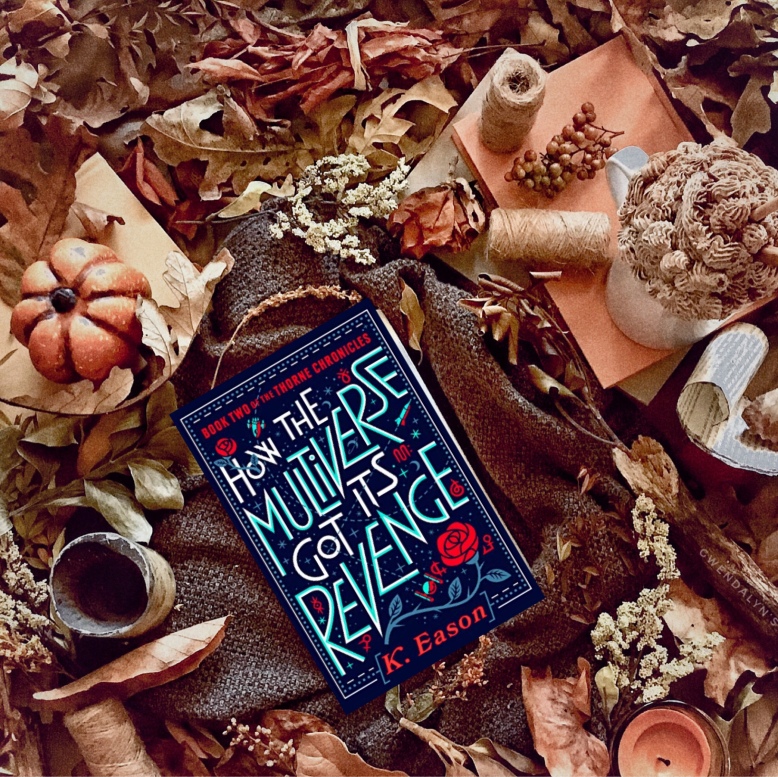 An action packed space opera, How the Multiverse Got Its Revenge is the second book in the space opera Rory Thorne Chronicles.

Rory thwarted the plot, saved the betrothed, incited a revolution, and renounced her title. Now a salvager privateer!

For those who haven’t read Rory Thorne, what are you waiting for?

To me this book was definitely more Starwars with darker action packed space battles. Set two years after the first book, How Rory Thorne Destroyed the Multiverse. Rory is struggling to be a normal citizen working as salvager. Things are still heating up even though she tries to distance her self from the political upheaval.

The storyline takes off when she happens to find a dead ship carrying a sentient super-weapon, bioengineered and capable of eradicating an entire planet. Rory along with some of her former bodyguards are privateers and when several different factions arrive to claim the highly dangerous weapon, things heat up and she is separated from her allies.

This was great second installment in a exciting and fun duolgy. I did find the pacing somewhat off. Not that it bothered me. Just something I noticed.

The tone of the book was different than the first book and with so much action sequences that it might have caused the authors writing to speed up and slow down on purpose.

A spunky heroine, action adventure, along with political intrigue, makes for a fascinating tale. All in all it was an enjoyable reading experience.

Are You planing on reading it? If so come back and share your thoughts!

Have a wonderful day,