Today I have wonderful book to share with you.

The Canterbury Murders by EM Powell

The Canterbury Murders
by E.M. Powell

A fire-ravaged cathedral. An ungodly murder.

Easter, 1177. Canterbury Cathedral, home to the tomb of martyr Saint Thomas Becket, bears the wounds of a terrible fire. Benedict, prior of the great church, leads its rebuilding. But horror interrupts the work. One of the stonemasons is found viciously murdered, the dead man’s face disfigured by a shocking wound.

When King’s clerk Aelred Barling and his assistant, Hugo Stanton, arrive on pilgrimage to the tomb, the prior orders them to investigate the unholy crime.

But the killer soon claims another victim–and another. As turmoil embroils the congregation, the pair of sleuths face urgent pressure to find a connection between the killings.

With panic on the rise, can Barling and Stanton catch the culprit before evil prevails again—and stop it before it comes for them?

The Canterbury Murders, is the third installment in the Stanton and Barling series.

Long time friends Thomas Beckett and King Henry II, soon clashed over clerical privilege. Henry stated that the church was subject to the law of the land, but Becket insisted that the Church was above the law.

In the year 1174, a devastating fire destroys the roof and the famous choir of Canterbury Cathedral where the mortal remains of Saint Thomas Beckett reside.

Prior Benedict is overseeing the massive restoration and rebuilding of one the. Most holiest of sites in the 12 century of England.

Hugo Stanton and Aelred Barling, the King’s clerk set out on a pilgrimage to the tomb of Saint Thomas Becket.

Soon after their arrival Benedict the Prior and The Archbishop Richard summons both Barling and his young assistant Stanton. They discloses that a stonemason has been found murdered. The Mason’s face was mutilated. A cut deep into his forehead, the holy Cross of Christ. There is urgency because count Philip of Flanders is on his way to visit the Martyrs tomb. Not wanting to out done King Henry is making his way and will arrive in four days. Barlings own personal reason for visiting the the tomb will have to wait. Now that they must find the killer.

As the two move through the investigation process, each men have their own unique way have gathering information. Things take a dark turn, and soon the body count becomes quite high.

This medieval thriller takes on a different turn with Barling, being so wrapped up in his own personal unrequited guilt. Leaving the investigation to Stanton this time. All the while Stanton is feeling at a loss as to why his friend, Barling has become so distant and reserved. Barling is struggling emotionally, dealing with his own internal turmoil.

This was a highly addictive read. It took off exceptionally fast. You are catapulted into the twelfth century. The atmospheric imagery, along with details of the people’s lives and their religious beliefs are brought to life. This meticulously researched historical was phenomenal. The plot line keeps you flipping through the pages and the rich details made me feel like I was front and center.

The characters were splendid and well developed, and the sub characters should be noted also The murder mystery takes center stage as the storyline unfolds and there are some intriguing twists. The two main POV’s will come to heads, as the intensity of finding the perpetrator mounts along with the death toll. It’s a riveting historical murder mystery for sure, and I felt invested into the lives of the characters within the pages.

This was a great exceptional written historical mystery set to the famous Christ Church of Canterbury during the the 12th century! 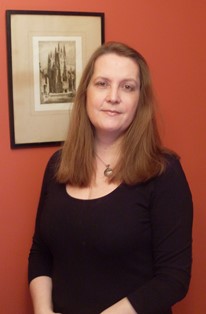 The third Stanton & Barling mystery, THE CANTERBURY MURDERS, will be released in November 2020.

Born and raised in the Republic of Ireland into the family of Michael Collins (the legendary revolutionary and founder of the Irish Free State), she lives in northwest England with her husband, daughter and a Facebook-friendly dog.

E.M. Powell is represented by Josh Getzler at HG Literary.

Monday, January 11
Guest Post at Novels Alive
Review at Passages to the Past

Wednesday, January 13
Feature at Words and Peace
Guest Post at The Writing Desk