ASIN : B08XDZCJ4Q
Publisher : Mike Bond Books (May 4, 2021)
Publication date : May 4, 2021
Language : English
Praise for MIKE BOND
“Master of the existential thriller” —BBC
“One of the 21st Century’s most exciting authors … spellbinding readers with a writing style that pits hard-boiled, force of nature-like characters against politically adept, staccato-paced plots.” —Washington Times
“One of America’s best thriller writers.” —Culture Buzz
“A master of the storytelling craft.” —Midwest Book Review
“Bond never loses the reader’s attention … working that fatalistic margin where life and death are one and the existential reality leaves one caring only to survive.” —Sunday Oregonian
“One of the best thriller writers, in the same league as Gerald Seymour and Frederick Forsyth.” —NetGalley
“Mike Bond is not only an acclaimed novelist… His intellect and creativity dance together on the pages, braiding fiction into deeper truths about ourselves, our nature, our government, our history and our future.” —Where Truth Meets Fiction
“Bond touches on the vast and eerie depths that lie under the thin crust of civilization and the base instinct within man to survive.” —Nottingham Observer (UK)
“Mike Bond’s books are a national treasure.” —Art Zuckerman, WVOX
“Bond uses his gift for fiction to teach us hard truths about religion, human nature, and warfare.” —Masterful Book Reviews
“A highly distinctive writer.” —Liverpool Daily Post (UK)

A decade that transformed America
The Sixties shook America to its foundation – the assassination of an idealistic young president, a tragic and unpopular war, a battle for civil rights, a cosmic clash of riots and burning cities, and an explosion of sex, drugs and rock’n roll.
For four young people, the Sixties is a decade of promise and freedom. For orphaned Troy, it’s the joy of living with his new family and exploring the world of flight and outer space. For Tara, the girl he loves, the power of song as she evolves into a rock’n roll star. For his new brother, Mick, a football hero and rebel, a time to question everything, including the fast-growing war in Vietnam. And for Daisy, the girl Mick loves, a chance to fight for equality, join the Peace Corps, and expand her study of the human mind.
America is the first of Mike Bond’s seven-volume historical novel series, capturing the victories and heartbreaks of the last 70 years and of our nation’s most profound upheavals since the Civil War – a time that defined the end of the 20th Century and where we are today.
Through the wild, joyous, heartbroken and visionary lives of four young people and many others, the Sixties come alive again, as do its questions: what is life? What is freedom? What was lost, what was won?
You can purchase America at the following Retailers:

A coming of age, americano historical fiction, that captures the lives of four people.

America by Mike Bond is the first installment in a seven volume historical novel series.

The author captures the victories and heartbreaks of the last 70 years and of our nation’s most profound upheavals since the Civil War.

This was truly a time that defined the end of the 20th Century and where we are today.

This book had me hooked from start to finish – I literally couldn’t put it down. The plot is captivating and absorbing, found myself in a constant state of curiosity, I was absorbed deep within these characters lives, questioning their situations and decisions. The narrative was brilliantly executed, weaving current events taking place in the background of the characters lives.

The book centers on four young people, as the book opens up Mick and Troy are eleven years old. Mick’s family owns a small rural farm near Nyack, NY, struggling to stay afloat. Troy is an orphan living in a boys home, who continues to escape its horrible living conditions.

The boys paths cross and a profound friendship develops. It’s 1954, and this sets up the book as we follow the two boys lives, along with Mick’s younger sister Tara and a their neighbor Daisy. As the book progresses, the reader is pulled along as events unfolds within the lives of the these young adults. Bond brings the struggles of America’s history and intertwines them within the the main characters lives. As the United States is undergoing changes with its value system. The political turmoil, and the Vietnam War are key points. I found myself fully invested into the main characters experiences as they grow from adolescents to young adults.

The characters grow into their own lives, as they question their beliefs and thoughts on current events of the day.

Excited to see for the next installment, in this promising book series 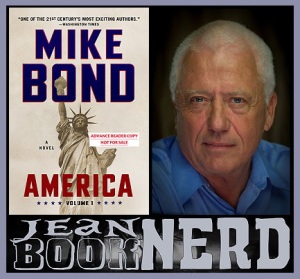 Bestselling novelist MIKE BOND has worked in many dangerous and war-torn regions of the world. His critically acclaimed novels portray the innate hunger of the human heart for good, the intense joys of love, the terror and fury of battle, the sinister conspiracies of dictators, corporations and politicians, and the beauty of the vanishing natural world.

Giveaway is open to International. | Must be 13+ to Enter
–  5 Winners will receive a $20 Amazon Gift Card or a Kindle Fire.
ENDS: MAY 24, 2021
*JBN is not responsible for Lost or Damaged Books in your Nerdy Mail Box*