Hello lovelies and welcome to my stop on Undercover Duke by Sabrina Jeffries!

Along with his stepsiblings, Sheridan Wolfe, Duke of Armitage, is determined to finally solve the mysteries behind the suspicious deaths of their mother’s three husbands. Tasked with investigating a possible suspect, Sheridan finds himself in dangerous proximity to her captivating daughter, Vanessa Pryde. But still haunted by a tragically lost love, the duke is resolved to resist the attraction—and avoid any “scheming” husband-hunters. Besides, lovely Miss Pryde seems utterly smitten with a roguish London playwright…

Vanessa thinks a little scheming may be in order—for it’s Sheridan she truly has her sights, and her heart, set on. Her theatrical flirtation is intended only to break through his business-like demeanor and guarded emotions. And as Sheridan’s jealousy becomes aroused, the two soon find themselves propelled into a scheme of an altogether different kind, involving a pretend engagement, a secret inquiry—and a perhaps not-so-secret leap into true love…

“Best-selling Jeffries, whose literary brand is synonymous with smart, sexy historical romance, wraps up her Regency-set Duke Dynasty series and the investigation into a series of ducal murders that began in Project Duchess (2019) on a high note with a perfectly fashioned love story rich in smoldering sexual chemistry, sharp wit, and a dash of danger.”
—Booklist

“Fans will delight in revisiting Sheridan’s large family in this heated, twisty tale of love and deception.”
—Publishers Weekly

“Vanessa and Sheridan each have endearing aspect…Readers of previous books in the Duke Dynasty series will be satisfied that the mystery of the murdered husbands is finally solved.”
—Kirkus Reviews

Sabrina Jeffries does it again in her conclusion and fourth Duke Dynasty novel. This time Vanessa and Sheridan have their own story to tell.

The new Duke of Armitage, Sheridan Wolfe, knows nothing about being a Duke. Thrown head first in his new position, that comes with a cart full of problems. The estate he recently inherited is swimming in debt. Also he struggles with a mathematical disability that is making it very hard to balance the books. This ways heavy on him along with past love lost that has left a lasting whole in his heart. He comes across as too serious, and unfeeling, but who wouldn’t blame him. The only way out of infernal mountain of debt that will keep his estate afloat is to marry someone will a large enough dowry to save his estate from complete ruin. Also there is an urgent need to find out who has been murdering his mother’s husbands.

Vanessa Pryde, is a vivacious feisty young woman, who’s heart has fallen for the broody Saint Sheridan Wolfe ever since his family arrived back in England. Now one knows this secret, and most of all she has led other to believe she has lost her head for a well-known poet and playwright.

A lovely historical romance, with a little bit of a mystery to propels this delightful book. A broody duke, a fake courtship, secrets abound. I truly enjoyed reading this book and thought it complemented the series perfectly! 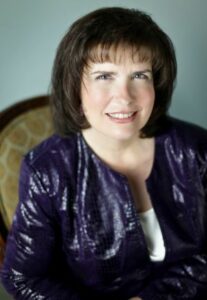 Sabrina Jeffries is the New York Times bestselling author of more than fifty novels and works of short fiction (some written under the pseudonyms Deborah Martin and Deborah Nicholas). Her writing has been published in more than twenty-one languages and there are over nine million copies of her books in print. A four-time RITA® Award-finalist, Jeffries has won the Holt Medallion Award, the Maggie, and the Booksellers’ Best Award. After earning her Ph.D. in English Literature from Tulane University, she chose writing over academics, and now her sexy and humorous historical romances routinely land on the New York Times and USA Today bestseller lists. Sabrina lives in North Carolina with her husband and adult son, who has inspired her to actively champion the cause of autistic children.

Visit her online at SabrinaJeffries.com.

Tuesday, May 25
Review at Michelle the PA Loves to Read

Wednesday, May 26
Review at Rajiv’s Reviews

Thursday, May 27
Review at The Romance Dish

Monday, May 31
Excerpt at Passages to the Past

Enter to win a paperback copy of Undercover Duke by Sabrina Jeffries! Two paperbacks are up for grabs.

The giveaway is open to the US only and ends on June 10th. You must be 18 or older to enter.